Group favorites Valencia and AS Roma meet at Mestalla stadium in the Champions League on Wednesday and there could be a lot of goals. 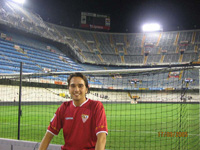 Both teams returned to the competition two weeks ago after a year's absence and confirmed their status by scoring four goals in their opening matches. Valencia won 4-2 at Olympiakos, while Roma trounced Shakhtar Donetsk 4-0.

"If we win this game we'll have 50 or 60 percent of the first phase of the Champions League achieved," Valencia's Brazilian midfielder Edu said. "We know Roma is in good form, winning and playing well, but we're at home and this is a different competition from their league."

Valencia's confidence is high after an impressive start to the season under coach Quique Sanchez Flores, who is starting his second season in charge.

The Spanish team, which was losing Champions League finalist in 2000 and 2001, is third in the league with three straight wins and a 1-1 draw at European champion FC Barcelona on Sunday.

AS Roma's most successful appearance in Europe's top club competition was also as a losing finalist in 1984, when it lost on penalties to Liverpool.

Although it finished fifth in Serie A last season, Roma was awarded second place and received a Champions League berth after penalties were handed out in the Italian match-fixing scanda, reports APl.

However, Roma has been hit by injury problems for Wednesday's game.

Midfielder Amantino Mancini is out for 15 days with a strain, winger Rodrigo Taddei who opened the scoring against Shakhtar has an ankle problem and striker Mirko Vucinic is also unavailable.

That's putting extra strain on captain Francesco Totti, who is still not 100 percent after undergoing left leg and ankle surgery in February.

Edu said his team still had to be watchful of the Italy international.

"He's a quality player. His teammates always watch Totti who controls play well. But if we play well defensively, we can cancel out a lot of Roma's moves," the Brazilian said.

Valencia will be without central defender Carlos Marchena, who tore knee ligaments two weeks ago to join two other Spanish internationals left back Asier del Horno and midfielder Ruben Baraja on the sidelines.