The performer of the Russian national anthem at the final match of the Bandy World Championship, Kristina Zhmudskaya, explained the reason that caused a confusing situation during her performance, when fans booed her poor singing in Sweden. 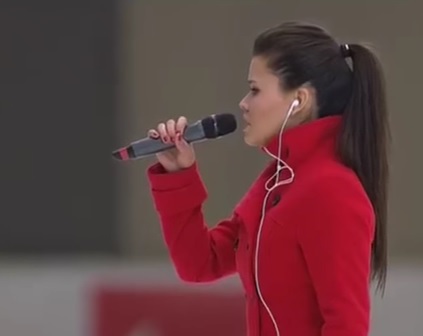 At first, the singer forgot the lyrics and continued singing after a pause. The singer's voice was trembling, and then she went silent for a couple of seconds. The confusion caused negative reactions in the audience.

The singer apologized for her mistake and continued singing. However, despite the confusion, the players and the majority of Russian fans present supported her by singing along.

Many social networkers defended the girl by saying that she was not a Russian, but a Swedish national, and singing the words of the Russian national anthem was not easy for her. Moreover, Kristina is not a professional singer.

Later, President of the Russian Bandy Federation, Boris Skrynnik, said that the fans did not boo the performance of the Russian anthem prior the final match of the world championship.

"There was no scandal at all. The singer did not stumble, there was a technical problem, and she got a little confused, but continued singing. No one booed her. I was there, and there was no negative reaction from the audience," he said.

As it became known, it was a technical malfunction that caused the confusion during the performance.

Zhmudskaya, who is not a professional singer, also said that she was very worried during the performance. "I got lost, but then I saw many people singing along with me. Afterwards, I went to the bathroom, I was crying. People were trying to calm me down by saying that it was a technical malfunction," added Zhmudskaya.

In the final match, team Russia lost to team Sweden with a score of 3:4.