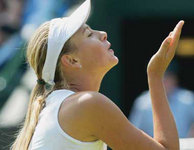 Russian tennis players Maria Sharapova has become engaged. She has fallen for the charms of the 26-year-old LA Lakers basketball player Sasha Vujacic who at 6ft 7in stand five inches than the former Wimbledon champion.

Vujacic told reporters before yesterday's Lakers game against the Golden State Warriors in San Diego that Maria has said yes to his "old-school proposal" at his home in Manhattan Beach, California.

"We are engaged and both really happy," said the Slovenian-born guard. "It's good and now we can focus on other things".

Sharapova has made no secret of the fact that she was looking for "a nice husband" and hopes to retire before too long, according to First Post.

Sharapova made her professional breakthrough aged 17 when she won her first major title at Wimbledon. The 23-year-old went on to win the 2006 US Open and the 2008 Australian Open, according to Celebrities With Diseases reports.

Vujacic and Sharapova met at a friend's party and have been dating for one year. The couple has been private about their relationship, not giving clues to the public about an upcoming engagement. Just last summer, Vujacic was seen in Sharapova's games at the US and Wimbledon Open. Additionally, the couple also went to Italy for a vacation.

Sasha Vujacic known as The Machine is the shooting guard of LA Lakers while Maria Sharapova is a former World No. 1 player, Seer Press says.