In the wake of the two-game suspension of one of the NHL's biggest stars in Alex Ovechkin, the 24-year-old Russian released a statement on Tuesday apologizing for injuring Blackhawks defenceman Brian Campbell. 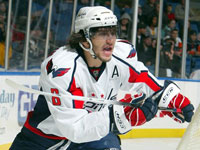 The Capitals released a statement from Ovechkin on Tuesday. Here is the full text:

I am very sorry that Brian was injured and I hope he is able to return to his team soon. NHL hockey is a physical game. We all play hard every time we are on the ice and have battles each shift in every game we play so we can do our jobs and win.

As players we must accept responsibility for our actions and I am no different but I did not intend to injure Brian and that is why I was disappointed with the NHL's decision yesterday. Every time I have the honor to play for my team, I will continue to do what I have done since I was taught to play.

I will play hard, play with passion and play with respect for my teammates, opponents and fans. I look forward to returning to my team and doing everything I can to be the best player I can be, according to a report in TSN.

Ovechkin is now considered a repeat offender under the collective bargaining agreement. He'll forfeit more than $232,000 in salary based on the number of games in the season instead of the number of days.

Ovechkin was suspended for two games Dec. 1 for a knee-to-knee hit on Carolina defenseman Tim Gleason.

Ovechkin will miss games Tuesday at Florida and Thursday at Carolina. He can return Saturday at Tampa Bay, The Associated Press reported.