Schumacher Is Moderate in His Wishes 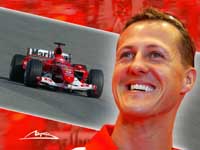 Schumacher Is Moderate in His Wishes

Michael Schumacher's plans include the victory of the Formula One championship with Mercedes within the next three years.

The 41-year-old seven-time champion who is coming back after three years in retirement says winning the title is the clear goal in his long-term intentions.

Schumacher told the reporters the title may not come in his first season, but that it was a realistic goal in the next three years.