The retired American professional basketball player Michael Jordan has been inducted into the Basketball Hall of Fame in a ceremony in Springfield, Massachusetts. 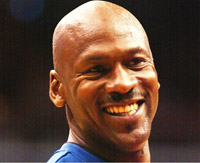 Jordan, 46, considered by many to be the game's greatest player, led the Chicago Bulls to six NBA titles before finishing with the Washington Wizards.

"Basketball has meant everything to me - it's been the place of the most intense pain and joy," said Jordan.

Stockton and Sloan played for and coached the Utah Jazz team Jordan's Bulls defeated in the 1997 and 1998 NBA finals, while Robinson won two NBA championships with the San Antonio Spurs. Stringer - who was inducted to the women's Hall of Fame in 2001 - is the only coach to lead three teams to the final four in the women's association.

But it was five-time NBA Most Valuable Player Jordan who was the centre of attention as the game honoured a remarkable career.

However, he was quick to honour his fellow inductees, saying: "Contrary to what you guys believe, it's not just me going into the Hall of Fame," added New Yorker Jordan, currently the managing member of basketball operations of the NBA's Charlotte Bobcats.

"It's a group of us and I'm proud to be a part of them and, believe me, I'm going to remember them as much as they remember me."

Jordan was also bashful about being tagged as the greatest player of all time, saying he did want to compare himself with players from the past.

"People say that I was the greatest who ever played the game, I cringe a little bit. I never played against Jerry West, Elgin Baylor, or Wilt Chamberlain," he said.

"Yeah, I would have loved to but to say that I'm better than those people is not for me to decide."

The great player also remarked that he didn't look at that moment as a defining end to his relationship with the game of basketball, according to BBC Sport's report.