Autopsy Releases Cause of Gatti's Death 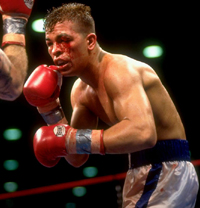 Autopsy Releases Cause of Gatti's Death

Gatti, who was raised in Montreal, was discovered dead in an apartment in Porto de Galinhas - a seaside resort community - in northeastern Brazil.

According to numerous reports, foul play is suspected. Gatti's blood-stained body was found early Saturday morning. He was in Brazil on a second honeymoon with his wife, The Gazette (Montreal) reports.

An autopsy indicated former boxing champion Arturo Gatti may have committed suicide, been accidentally killed or murdered, according to a Brazilian newspaper that said it obtained a copy of the coroner's initial findings.

Police have said they are certain Gatti's 23-year-old wife strangled the boxer with her purse strap as he drunkenly slept July 11, Calgary Herald reports.

Police suggested Gatti was too drunk to defend himself when he was killed, and she was arrested, New York Daily News reports.

But according to reports, a Brazilian judge has ordered the immediate release of Amanda Rodrigues when investigators have decided the boxer died as a result of suicide, Vancouver Sun reports.