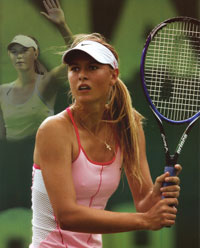 The 62nd-ranked Sharapova, working her way back from right shoulder surgery, avoided losing her first match in a tournament since Oct. 8, 2007, in Moscow to Victoria Azarenka. She has not lost a first round match since Aug. 11, 2003 to Elena Likhovtseva in Toronto.

Sharapova recovered from a 4-0 deficit in the first set, but then allowed a 5-2 lead in the second set to get away before dominating the third set, The Canadian Press reports.

"Overall, I thought I played pretty solid," Sharapova said. "Obviously, I'm a little bit disappointed that I couldn't close out it out in two. But I think it only makes you stronger when you do end up losing that second set and you have to go back out in the third and keep your concentration and try to win that match," San Jose Mercury News reports.

The Russian star, who won Wimbledon at 17 and signed a major modeling contract soon thereafter, could quit tennis today and not worry where her next salad is coming from. Forbes magazine last year named her the highest-earning female athlete at $26 million per year. She has homes in Bradenton, Fla., and Los Angeles.

But the glamour girl clearly wants to return to her pre-surgery form. She couldn't defend her Australian Open title this year and fell out of the top 100 (She's currently No. 62, while Sugiyama is No. 57.), The San Francisco Chronicle reports.