Mark Cavendish, a 24-year-old British rider on the Columbia-HTC team, won the 19th stage of the Tour de France on Friday, beating Thor Hushovd of Norward by over a bike’s length in a frenetic bunched sprint to the finish, with Gerald Ciolek of Germany taking third. It was Cavendish’s fifth stage victory at this year’s Tour, New York Times reports. 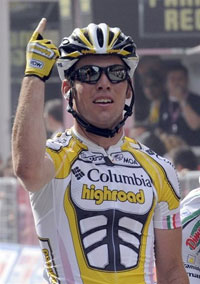 Cavendish took advantage of Team Columbia's leadout to hit the front in the closing stages of the 178-kilometre route from Bourgoin. And the Briton once again proved unstoppable, holding off Thor Hushovd to cross the line unchallenged.

Cavendish's Columbia team were omnipresent in the 15km chase to the finish and after a late futile attempt by Ballan to escape he was reeled in 1km from the finish.

Hushovd, wearing his green jersey for the points competition, was tight on Cavendish's wheel but the Isle of Man sprinter was benefiting throughout on the slipstream of Martin.

Once the German peeled off Cavendish pummeled the pedals and Hushovd, pulling what appeared to be a bigger gear, could do little as he had to settle for second, The Associated Press reports.