Ricky Rubio is going to leave Spanish basketball club DKV Joventut even if the Minnesota Timberwolves cannot reach a deal to bring their first-round draft pick to the NBA. 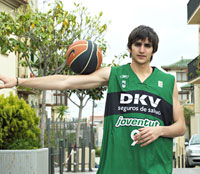 Timberwolves President David Kahn was in Spain this week to try and help the fifth overall pick negotiate a buyout of his contract with Joventut. Rubio is at odds with his boyhood club over a buyout clause that could cost the 18-year-old point guard as much as $6.6 million. The NBA's collective bargaining rules limit the Timberwolves' contribution to $500,000, The Los Angeles Times reports.

Rubio signed with Joventut at 14 years old, becoming the youngest player to play in a Spanish ACB League game. He rose to prominence over the next few years, playing for Spain's silver medal-winning team in the Beijing Olympics at 17 and becoming a popular player thanks to his flashy passes and floppy hair.

Minnesota drafted him fifth overall in June and holds his NBA rights for as long as Rubio is playing basketball professionally, The Seattle Times reports.

"I want to continue with the club but, after everything that's happened, I don't think they're too comfortable having me in their squad,'' Rubio said Wednesday. "I want to play in a winning team, on a team that can achieve many things,'' FanHouse reports.

In all seriousness, the most likely outcome to all of this is Rubio's next team is the Minnesota Timberwolves; they just hope it all gets worked out for Rubio to join the team for training camp in October, HoopsWorld reports.