Barcelona coach Josep Guardiola said Monday that wants Cameroon striker Samuel Eto'o, who is linked to a move to Inter Milan, to leave the Spanish club. 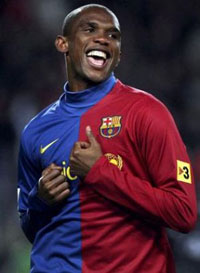 “I fully understand that people ask why. He is a wonderful player. Everyone knows there are no 'football' reasons. So why? It is a question of feeling," Guardiola told a news conference as Barcelona resumed training. I feel that it is the best for the team, for the club, but I don't dare say that it is best for Samuel. I am very grateful to Samuel, not for this year but for the five years he has spent here,” AFP reports.

“I am not here to change anyone's character, but I can decide on which players I want to count on for the season. After what we won, we had to change the dressing room. I took this decision from my experience as a footballer,” he added, BBC News reports.

Guardiola's words suggest he wants the Cameroon star to move to Inter for the good of all at Barcelona, but he admits there will be no rumpus if the move doesn't take off.

“Inter have the money to make Eto'o happy, but if he wants to stay then I will have no problem with that.

“Everything depends on Eto'o. He has the right to evaluate Inter's offer and make a decision.”

Guardiola admits that Ibrahimovic will not arrive unless Eto'o goes, despite earlier claims from president Joan Laporta who said the Sweden striker would arrive regardless of whether Eto'o stayed on. The coach also explained there are no reasons for the decision to sell, Goal.com reports.