Manny Ramirez was little help for Los Angeles in his first game at Dodger Stadium since his 50-game suspension ended as Wandy Rodriguez combined with four relievers on an eight-hitter in the Houston Astros' 3-0 victory Thursday night. 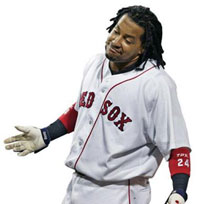 Back in Mannywood, Ramirez went 1 for 4 with two strikeouts while being welcomed with cheers, chants of his name and camera flashes that sparkled around the stadium, The Associated Press reports.

Before the Dodgers' public-address announcer could even say Manny Ramirez's name prior to his first at-bat Thursday, the Dodger Stadium crowd was already on its feet chanting, "Manny, Manny, Manny."

"Like I've said before, we have the best fans in the world," said Ramirez, who flied out to right in his first at-bat, struck out in his next two at-bats and finally broke through with an eighth-inning single in his final at-bat, MLB.com reports.

The 3-0 victory, however, belonged to Wandy Rodriguez and the Astros, who beat the team with the best record in baseball to move above .500 for the first time this season in their first game after the All-Star break.

"I used a lot of my breaking ball," Rodriguez (9-6) said after holding the Dodgers to five hits and two walks with six strikeouts over six scoreless innings, extending his scoreless streak to 17 innings. "And my location was very good today.

Ramirez, who was 0-for-3 with two strikeouts against Rodriguez and 1-for-4 overall, didn't get on base until he led off the eighth with a single to right off LaTroy Hawkins before a boisterous crowd of 45,970, The Houston Chronicle reports.