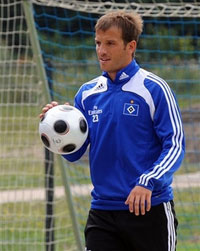 "Last night everything came together, and I am now moving to Real Madrid," Van der Vaart said on his personal Web site. "As everybody might know I have always wanted to move to Spain, because I have a strong bond with that country. Now I'm going to play for Real Madrid. It's a dream comes true!"

The 25-year-old Netherlands midfielder, whose mother is Spanish, said he would be presented by Madrid on Tuesday, describing it as "the start of a new chapter" in his life.

Hamburg spokesman Joern Wolf said Monday the deal, reportedly worth Ђ13 million (US$20.3 million), is not completed yet, but would likely be sealed in the afternoon.

The German club is believed to have rejected previous lower offers for van der Vaart, with its coach Martin Jol expressing hope that the player would not be allowed to leave.

However, as a prelude to a move, Van der Vaart was left out of Hamburg's lineup for the preseason Emirates Cup matches against Madrid and Juventus in London this weekend.

He would be Madrid's second signing since it won the Spanish title for a record 31st time last season, following Racing Santander's Argentine defender Ezequiel Garay. In addition, midfielder Ruben de la Red, who helped Spain win the European Championship in June, and defensive midfielder Javi Garcia have rejoined after a season on loan with Getafe and Osasuna respectively.

Madrid has also been repeatedly linked with a record-breaking signing of Cristiano Ronaldo from Manchester United, with speculation that forward Robinho will be sold to Chelsea.

Van der Vaart's arrival would help Madrid cover for the loss of Sneijder, who suffered a serious knee injury in Sunday's friendly with Arsenal and could be absent for six months.

Madrid kicks off the season on Aug. 17 with the Spanish Supercup first leg against Copa del Rey champion Valencia. It begins its league title defense with a trip to Deportivo La Coruna on Aug. 30 or 31.