Holland 1 Russia 3. What an amazing game of football, what a sensational victory for Russian football, for the players of this young, talented, disciplined and determined Russian team and what a shining medal on the chest of Guus Hiddink, the Dutchman who came to Russia to transform a team of spirited young and inexperienced boys into the most valliant lions this game has ever known. 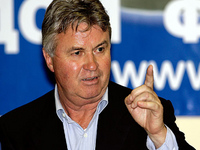 Holland 1 – Russia 3. Holland, arguably (until tonight) the best team on the planet and everyone’s favourite for the UEFA 2008 totally dominated, controlled, liquidated and finally annihilated by the superior tactics, hard work, good will and more than that, the heart, of the Russian team, the heart of Mother Russia beating as she awakens and opens her arms, portraying an image of the most astonishing beauty mankind has ever seen.

Forgive the poetry in a football piece...tonight was special and nobody can take tonight, the first day of Summer, away from Hiddink and his Russian lionhearts.

The Russian players began the game with the heart of a lion. On 6’, Yuri Zhirkov forced Van der Sar to make a spectacular save. On 8’, Roman Pavluchenko headed over, from a dangerous position in front of the Dutch goalkeeper.

The first 15 minutes belonged to Russia, causing nods and raised eyebrows from the sport’s most experienced commentators here in Basel. Holland only managed to penetrate the Russian defence on 19’, when Wesley Sneijder turned Aleksandr Anyukov and shot.

Holland woke up, but Russia did not waiver. What ensued was end-to-end football, the determination of the Russian players rocking Holland back on its heels. On 25’, Orlando Engelaar shot wide after a corner. 30’ - Andrei Arshavin entered the area like a rocket and shot at goal, Van der Sar defended; in the same minute, Denis Kolodin exploded his right foot onto the ball from 30’. Van der Sar was lucky to grab the ball which on 32’, he would hear hissing past his post (Volodin again, 40 metres).

Holland mustered up an attack -on 36’, Van Nistelrooy forcing the 22-year-old Akinfeev to a world-class defence.

Holland desperately tried to find a way through Russia’s packed midfield but Hiddink’s young boys were by now fighting as more than equals, undeterred from their victorious task and unashamed to display their superior football. Russia kept on attacking. Van der Sar denied Russia the second goal on 76’ (Pavluchenko).

The Dutch responded with a fury which has swept aside Italy, France and Romania in this competition. 79’, Sneijder started firing his best artillery shots, missing the target by a few centimetres, came closer still on 81’ and on 84’, his partner-in-crime Robin Van Persie scraped the paint off the post. 85’, the Clockwork Orange came alive. 1-1, Van Nistelrooy.

The commentators were saying that Russia’s boys were so inexperienced that they had run too much and would tire out, that Holland was preparing something special. Nothing of it. Holland, arguably the most powerful team in the world before this game, was reduced to shrugs, looks of panic and more and more desperate shots from outside the area, as Russia’s Akinfeev grew by the minute to dictate his masterful presence in Russia’s area, the Russian midfield ferried the ball confidently to the talented and fearless attack.

The Russian fans in the crowd, outnumbered 80% to 20%, silenced the hitherto vociferous Dutch.

95’ Andrei Arshavin dribled into the area and shot over. 96’, Pavluchenko, ball against the crossbar. 99’, Arshavin passed to Torbinski, who just failed to contact in front of the Dutch goalkeeper. Dress rehearsal.

116’, Arshavin himself buried the ball, and the game, in the net.

Whatever happens tomorrow...Russia, today, was the best team in the world.