Monday the Cincinati Bengals waived Odell Thurman. There have been reports that the move was related to Thurman missing Offseason Training Activities (OTA's) which are not mandatory, it is unknown if this is actually the case. 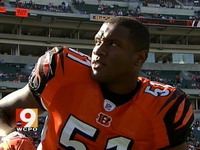 This happened just less than one month after Thurman was reinstated by NFL Commissioner Roger Goodell.

"Odell has met the NFL's conditions for reinstatement and has been added to our offseason roster," said Bengals coach Marvin Lewis.

Odell Thurman was suspended by the National Football League for two seasons for violating the league's substance abuse policy. According to sources, Thurman either tested positive for the drug test or failed to take the test.

The move proved the team’s hard policy on player conduct, the line that was also in action with Bengals’ receiver Chris Henry. Thurman, in other words, failed to participate in team’s campaign to install a new defense.

Thurman was selected 48th overall, in the second round of the 2005 NFL Draft by the Cincinnati Bengals.

While Odell Thurman made typically rookie mistakes, he became a popular and productive addition to a significantly improved Bengals defensive unit. Thurman intercepted five passes and was a candidate for the NFL Defensive Rookie of the Year Award.