Timothy Montgomery, a former American athlete and 100 m record holder, has got 46 months of imprisonment for his complicity in a fraud case. 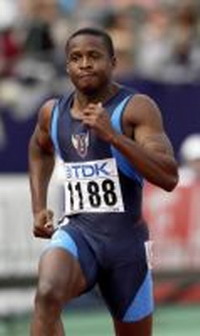 In April 2006, Montgomery was indicted and arrested on fraud charges for his alleged involvement in a money laundering scheme. He was accused of depositing three bogus checks totaling $775,000. Montgomery allegedly received $20,000 for his participation. His former coach, Steven Riddick, was also a defendant in the case.

Riddick is serving a five-year prison term. Marion Jones, Montgomery’s former partner, is serving a six-month prison term for lying to investigators about the check-fraud scam and using steroids.

Montgomery pleaded guilty to the charges on April 9, 2007.

The greatest moment in Montgomery's career came in September 2002, as he broke Greene's 100 m world record by 0.01 seconds. With a tailwind of 2.0 m/s (the maximum allowed), Montgomery ran 9.78 to earn the title of world record-holder and "fastest man on earth."

Later on he was stripped of his records after being found guilty of using performance-enhancing drugs.