Larry Harris is going to leave the Milwaukee Bucks when his contract is expired in June. 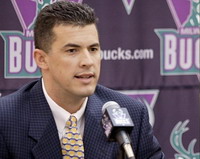 Harris decided to learn about his fate in the team as the General Manager and was given no development. He wasn’t offered a new contract for the next season.

Harris was hired as a general manager for the Milwaukee Bucks in 2003 worked until March 19, 2008 . But actually he had been with the franchise since 1990, beginning as the scout/video co-ordinator under his father, then-coach Del Harris, but failed. Now it’s time for the team to change its direction and for the manager to use other opportunities.