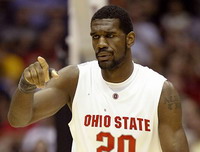 Greg Oden, an American basketball player, currently signed to the Portland Trail Blazers, has returned on the floor after a microfracture surgery on his ailing right knee.

Oden was expected to stay from playing for a long time, but the reports showed that he was progressing, thus making the scheduled healing time shorter.

Just before the All-Star game Oden began to run workouts with the team, passing and running plays. A full recovery is expected by next season.

Both Oden and the team feel excited about the return and raises anticipation for the next season.