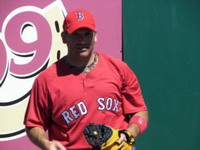 On March 13, 2008, Douglas Mirabelli was dismissed by the Red Sox to make room for catcher Kevin Cash.

Mirabelli was to participate in exhibition game against the Tampa Bay Devil Rays, but was taken off the list an hour before game time.

In January 2008, Mirabelli agreed in principle to a one year contract to return to the Red Sox for the 2008 season. The deal was reported to have a base salary of $550,000 with incentives.

His twelve-year career is marked with a .231 hitter with 58 home runs and 206 RBI in 566 games. He has become well-known as the personal catcher for knuckleballer Tim Wakefield. He was part of the Red Sox' World Series Championship teams in 2004 and 2007.