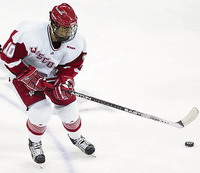 The first victim was Chicago Blackhawks defenseman James Wisniewski, who received one-day-suspension penalty for cross-checking forward Mikael Samuelsson of the Detroit Red Wings in the face on Tuesday.

The next “on trial” was Dallas Stars forward Steve Ott. The league suspended him for three games due to an illegal hit on Jordan Leopold of the Colorado Avalanche during a game on March 9, 2008. For the hit, which left Leopold injured, Ott took both his feet off the ice and his elbow may also have made contact with Leopold's head.

Andrew Peters, an ice hockey left winger for the Buffalo Sabres, got a one-game suspension for punching Colton Orr of the New York Rangers, just before the teams' overtime period started Monday.