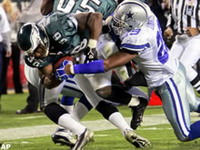 On March 11, 2008, Keith Davis signed a deal with the Miami Dolphins, reuniting him with team vice president Bill Parcells. The terms of the contract were not revealed.

Davis was originally signed by the Dallas Cowboys as an undrafted free agent in 2002. He was also a member of the World Bowl XII champion Berlin Thunder of NFL Europa. Davis was frequently touted by former head coach Bill Parcells and others for his excellent special teams play, having led them twice in special teams tackles.

On July 16, 2006 , Davis was shot in the head and in the thigh in a drive-by shooting while driving. This was actually the second time Davis had been shot, the first being an incident in which he had been an innocent bystander.