A Major League Baseball first baseman for the St. Louis Cardinals, Albert Pujols, will not undergo surgery, as it may kick him out for the upcoming season. 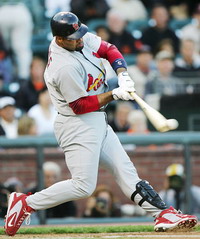 Pujols is in need of reconstructive procedure on his chronically injured right elbow. In case it’ll really hamper Pujols from playing and become a significant problem, the operation is inevitable.

A minor injury received in 2003 led to a torn ulnar collateral ligament, bone spurs, arthritis and swelling in his elbow.

In recent years, Pujols has become an excellent defensive player at first base, winning his first Gold Glove award in 2006.

He won (as did fellow Cardinal, catcher Yadier Molina) the prestigious Fielding Bible Award for his defensive excellence at first base, which is given to only one player per position in the major leagues.