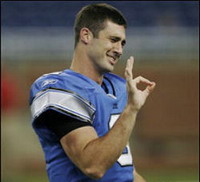 On April 9, 2007 Harrington agreed to a two-year, $6 million contract with the Atlanta Falcons to compete with D. J. Shockley and Chris Redman to back up Michael Vick.

Harrington was elevated to starting QB after the suspension of Michael Vick for the 2007 season. Harrington performed well in pre-season, but after going 0-2 Atlanta signed former Jacksonville starting quarterbeck Byron Leftwich as a possible replacement for Harrington.

During Week 3 Atlanta home opener against division rivals the Carolina Panthers Harrington completed 31/44 passes with 2 touchdowns and zero interceptions for a 110.1 QB rating in a 20-27 loss. In Week 4 Harrington improved on his numbers with a 121.7 QB rating where he had 23/29 passes, no interception for two touchdowns which lead to the first win for the Atlanta Falcons in the 2007 season.

Harrington completed 215-of-348 passes for 2,215 yards, with seven touchdowns and eight interceptions over 12 games (10 starts), as Atlanta finished a disappointing 4-12.