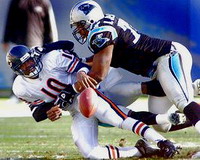 On February 29, 2008, Kris Jenkins was traded by the Carolina Panthers to the New York Jets for third- and fifth-round draft picks in the 2008 NFL Draft.

A two-time All-Pro and three-time Pro Bowl selection, Jenkins played seven seasons for the Panthers before being traded to the Jets.

This deal on the one hand will give Jenkins a chance to play again and even become the leading defensive tackle with the Jets, but on the other hand it gives the Panthers an opportunity to avoid paying a $1 million roster bonus and clear about $3 million in salary-cap space.