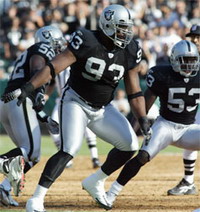 The Oakland Raiders signed Tommy Kelly to the largest contract ever given to a defensive tackle on the eve of free agency.

Kelly, a defensive end scheduled to move to defensive tackle this season, signed on February 28, 2008, a seven-year, $50.5 million contract with $18.125 million in guarantees. Over the first three years of the deal, he will make $25.125 million.

The Raiders' plan is for the 300-pound Kelly to replace the retiring Warren Sapp as the three-technique defensive tackle in their '4-3 defense.

Kelly played in 7 games in 2007, recording 30 tackles and 1 sack before suffering a season ending knee injury while playing against the Tennessee Titans. He was placed on injured reserve by the Oakland Raiders on October 31, 2007.