The Irvine Police Department has served an arrest warrant on a Major League Baseball player with the St. Louis Cardinals, Scott Spiezio. He is charged with driving under influence, driving under the influence with a blood alcohol content of .08 percent or more, hit and run, aggravated assault, assault and battery. 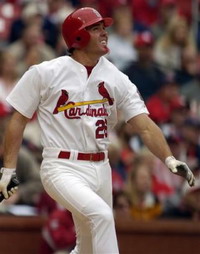 A single-car crash has brought Spiezio this bunch of charges.

The officers discovered his BMW, while the driver himself was seen running from the crash site. The witness and victim in complex was Spiezio’s neighbor, who reported about the assault.

On August 7, 2007, Spiezio suffered a physical breakdown during the Cardinals' game against the San Diego Padres. Suffering from an elevated heart rate and "sweating profusely", Spiezio was placed on an IV. He was described as being "irritable and anxious". Spiezio disconnected the IV and left the stadium rather than seek medical attention. On August 9, 2007, the Cardinals placed him on the restricted list. The Cardinals stated that Spiezio would be seeking treatment for an unspecified substance abuse problem. On September 14, 2007, Spiezio was removed from the restricted list after 36 days and also re-activated to play in that evening's home game.