An American football quarterback, Derek Anderson, has to take a decision about his future status. 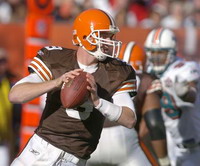 He will become a restricted free agent on Friday. Henceforth he can either accept the Cleveland Browns' offer to sign a three-year deal worth $20 million, with $10 million guaranteed, or take a one-year tender worth $2.52 million. The tender will allow the Browns to match any other team's offer to Anderson, or receive first- and third-round draft picks if he ends up with another team.

Anderson led the Browns to a 10-6 overall record, 10-5 in games in which he started. Anderson finished with 29 touchdowns to 19 interceptions. During the week of December 12-18, Anderson was named as a first alternate for the 2008 Pro Bowl at quarterback. On February 4th, Tom Brady of the New England Patriots announced he would not be attending the Pro Bowl due to injury. This paved the way for Anderson to make his first trip to the Pro Bowl.