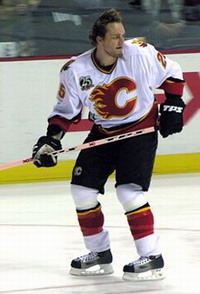 Drafted in the 2nd round, 46th overall, by the Red Wings in the 1992 NHL Entry Draft, McCarty scored 26 points in his rookie season as the Wings won the Central Division title. In the 1996-97 NHL season, McCarty scored a career best 19 goals and 42 points as the Wings swept the Philadelphia Flyers for their first Stanley Cup in 42 years. McCarty scored the series-clinching goal in Game 4. This goal, scored on an inside-outside move around a Flyers`defenseman and goalie, was honored as one of the best goals of the year.

From the 1997-98 season until his departure from the team, McCarty was part of Detroit's famous Grind Line with center Kris Draper and winger Kirk Maltby, which was often matched up against the opponent's top offensive line.

One of McCarty's most infamous moments was in the famous "Fight Night at the Joe" on March 26, 1997, where a massive brawl broke out between the Colorado Avalanche and Red Wings. McCarty brutally defended himself against Avalanche right winger Claude Lemieux with a blistering punch, and continued punching Lemieux while Lemieux turtled to avoid damage. They later rematched with no clear winner of the altercation.

In the 2002 Stanley Cup Playoffs, McCarty registered his first hat trick in Game One of the Western Conference Finals against the Colorado Avalanche's Patrick Roy. McCarty scored four goals in the series, a career best. Detroit won the series and eventually a third Stanley Cup in six years.