Eric Gagne apologizes to his friends, family, gives no comment upon allegations 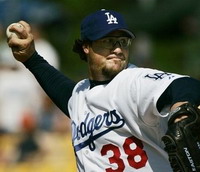 Eric Gagne apologizes to his friends, family, gives no comment upon allegations

Eric apologized to his family, friends and new Milwaukee Brewer teammates but neither admitted nor denied the allegations. His speech was not long and he didn’t allow any questions.

Signing with the Los Angeles Dodgers as a free agent in 1995, Gagné began his career as a starting pitcher. After he struggled in that role, the Dodgers converted Gagné from a starter to a reliever, where for three years (2002–2004) he was statistically the most outstanding closer in the game, winning the Cy Young Award in 2003. During that period, he set a major league record of 84 straight converted save chances.

Following this success, Gagné played sparingly in 2005 and 2006 due to injury, undergoing Tommy John surgery in 2005 and suffering a serious back injury in 2006. Gagné signed with the Texas Rangers for the 2007 season and enjoyed success again as a closer. After being traded to the Boston Red Sox on July 31, 2007, Gagné ultimately became a member of the 2007 World Champion Red Sox team.

On December 9, 2007, Gagné reached a preliminary agreement with the Milwaukee Brewers. On December 10th, he inked the one year deal to become their new closer. The deal has a base salary of $10 million, with incentives worth up to an extra $1 million.

On December 13, 2007, Gagné was listed in the Mitchell Report — former Senator George Mitchell's report on steroid use in baseball. Gagné was identified as a user of HGH (Human Growth Hormone). Allegedly, Gagné received the drugs from steroids dealer Kirk Radomski. At first Radomski said that Gagné obtained them from Dodgers teammate Paul Lo Duca, but Radmonski said in the report that he mailed two shipments of HGH directly to Gagné in 2004. Receipts of FedEx and USPS shipments indicate that Radomski received at least one payment from Gagné and two from Dodgers teammate Lo Duca on behalf of Gagné. Gagné declined to meet with Senator Mitchell to respond to the charges before the report was released.