An American football player, Zach Thomas, ended his tenure with the Miami Dolphins on February 14, 2008 when it was announced by the team that he no longer fit into their long term plans. Now he is going to continue his career with another team. 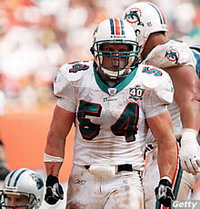 He missed most of last season because of concussions and migraines and was placed on injured reserve against his wishes in December.

Thomas is a linebacker, and has been with Miami Dolphins for the eleven seasons he has been in the NFL. He led the Dolphins in tackles 10 times, is the franchise's all-time leader in that category by a wide margin, and his 168 games is the most by any Miami defensive player.

He has been selected to the Pro Bowl seven times, and has recorded over 1,500 tackles.

Zach Thomas has more tackles than any linebacker in the Pro Football Hall of Fame, currently ranking second all-time.