Piniella loses weight due to disappointment in Cubs’ season?

Lou Piniella lost a few pounds over the offseason, thanks to a stricter diet and three-times-a-week exercise sessions that included walking. 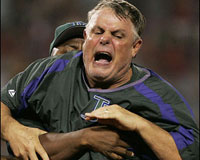 Piniella loses weight due to disappointment in Cubs’ season?

It also gave him to reflect on how his first season as manager of the Chicago Cubs ended.

Pinella says he's disappointed in the season. His comments came today at the team's winter convention, the AP reports.

Louis Victor Piniella is the current manager of the Chicago Cubs and a former Major League Baseball outfielder. He has been nicknamed "Sweet Lou," both for his swing as a major league hitter and, facetiously, to describe his demeanor as a player and manager.

On October 16, 2006, Piniella agreed to a three-year contract to manage the Chicago Cubs. The contract is for $10 million over three seasons with a $5 million option for a fourth year

Famous for his anger and meltdowns, he showed it during a press conference after a Cubs-Reds game on April 13, 2007 when Cubs ace Carlos Zambrano blew a five run lead in the 5th inning in which the Reds scored 6 runs, winning the game 6-5. A reporter asked him what was not working for the Cubs. He responded in a loud, angry voice, "What the hell do you think isn't working?! You saw the damn game! … This guy is your ace, you got a 5-0 lead with the eighth and ninth hitters coming up, you feel pretty good about that inning and all of a sudden it turns into a six-run inning,” Piniella said, obviously still agitated but calmer. “And then I bring in the reliever who’s throwing 30-to-40-foot curveballs to boot. I can see. I can start to see some of the ways this team has lost ballgames. I can see it. We’ve got to correct it obviously. This game here is one that got away from us that really shouldn’t.” In a similar meltdown after the May 17, 2007, game against the Mets, Lou stated, "I don't care about feelings".

Known for his often aggressive and sometimes explosive behavior, Piniella is one of the most-ejected managers in major league history with 60 career ejections, only one behind long-time friend and Cardinals manager Tony La Russa. He had a reputation for being less than patient with pitchers, often sending his pitching coach to remove them from the game. He even got into a clubhouse scuffle with pitcher Rob Dibble while with the Reds which was caught on video, ending with the two being pulled apart and Lou screaming, "You don't want to be treated like a man!"