Robbers broke into Anna Chakvetadze's home outside Moscow, tied Russian tennis player and stole money and goods worth hundreds of thousands of dollars. 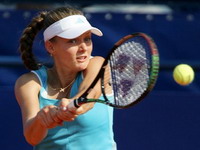 Six assailants approached the home before dawn, tied up a maid in another building and forced her to hand over a remote control that enabled them to enter the home through the garage, Dzhamal Chakvetadze told NTV television.

"They started to beat me, and I resisted. They hit me over the head with, I think, a pistol butt. It was dark," he said, taking off his cap to show his bruised scalp. "They took out a pistol and told me my child was at home - reminded me - and they told me to hand everything over. I did."

NTV reported that the robbers took about US$106,000 (74,000 EUR) in cash, as well as jewelry and other goods worth about 5 million rubles (US$200,000; 140,000 EUR). The ITAR-Tass news agency cited unidentified police officials as saying the total worth of the stolen money and goods was about 5 million rubles.