A route for the 2008 edition of the Spanish Vuelta was revealed Wednesday. Organizers said the 2009 edition will start in Assen,the Netherlands. 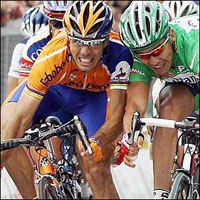 The three-week race gets under way in the Andalucian city of Granada on Aug. 30, and will culminate after 21 stages and 3,169-kilometers (1,969-miles) with its traditional finish in Madrid on Sept. 21.

The arduous Alto de Angliru ascent returns next year after a six-year absence from the Spanish classic. British cyclist David Millar withdrew from the 2002 edition in protest of the Angliru climb, which is rated as one of Europe's toughest.

Riders will brave the ascent on the 13th stage, with a 12.9-kilometer (8.02-mile) climb to the finish line at Angliru.

The 2009 edition will feature a first-stage time trial in and around Assen in the northeastern Dutch province of Drenthe. The second stage will also set off from Assen, which usually hosts an annual Moto GP race.

But before the riders take to the flats of Holland, they must navigate a 63rd edition that features at least five mountain top finishes a route that race director Victor Cordero said was planned with the fans in mind.

"It's a Vuelta of hope," Cordero said. "We want a clean, credible and spectacular race."

Television audiences for the annual race have decreased following major doping scandals in the sport, and organizers hope the tough climbs will bring fan interest back up.

Twenty teams of nine riders will race past the famous Alhambra mosque in Granada to start, with the 7-kilometer time trial the first of three in the race.

The route also includes three straight mountain finishes in the Pyrenees, beginning with the 224-kilometer (139-mile) seventh stage, the longest of the race, ending with a 4-kilometer (2.5-mile) ascent into Andorra.

The race moves westerly along the northern coast from there, with cyclists following Angliru with a second straight tough climb to the E.E. Fuentes de Invierno ski resort in the Picos de Europa mountains for the 14th leg.

Following the final rest day, teams make their way to Madrid, where the penultimate 16-kilometer (10-mile) time trial into Alto de Navacerrada sets up a 110-kilometer (68.4-mile) final ride to the Spanish capital.