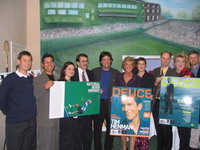 "To us, nothing is more important than the integrity and honesty of the sport," de Villiers said in an interview with The Associated Press. "We'll do everything we can to ensure that the fans and the media and everyone else who cares about tennis know that when there is an upset ... it's because of the athletes and not anything else."

A three-day ATP board meeting in Shanghai during this week's season-ending Masters Cup resulted in a new rule that requires players or their entourages to notify officials within 48 hours if they hear any information about gambling or match-fixing, de Villiers said. Players also are being given until the end of 2007 to report any such contacts over the last five years.

Penalties for not doing so are still being worked out but likely will be in line with the maximum three-year suspension and US$100,000 (68,000 EUR) fine for players gambling on the sport. Under a zero-tolerance policy, Italian player Alessio Di Mauro last week was handed a nine-month suspension and fined $60,000 for betting on matches online.

Di Mauro has said he will appeal, saying the punishment was too severe because he did not attempt to affect any results and did not wager on his own matches.

The ATP also has chosen a new anti-corruption baron who will be identified soon, who will review the gambling issue and help draft a common anti-corruption rule in the coming months, de Villiers said.

With tennis a largely individual sport, concerns about gamblers or organized crime trying to predetermine match results have risen with the increase in Internet gambling.

The specter of gambling came into focus in early August when an online betting company suspended more than US$7 million in wagers on a match between fourth-ranked Nikolay Davydenko and Martin Vassallo Arguello. De Villiers has been careful to stress that an investigation is focused on unusual betting patterns during the match at the Poland Open - when Davydenko retired while trailing in the third set - and not specifically on either player.

"We need to understand what happened," de Villiers said, urging patience while the investigation continues. "We're comfortable we're doing the right thing here. Governing bodies have to protect their sport."

But he also said it was possible that investigators may never be able to figure out exactly what happened.

Despite the focus on the investigation, de Villiers asserted that the game is generally in good shape, with attendance and TV viewership rising and sponsors pumping another US$1 billion (680 million EUR) into the sport starting in 2008.

The board meeting finalized its 2009 schedule, when the ATP is dropping its Masters Series title and logo, instead calling the elite events "1,000" tournaments because that's the number of ranking points the champion gets. Those eight events will be in Indian Wells, California; Miami; Rome; Madrid, Spain; Cincinnati; Toronto/Montreal; Shanghai, China; and Paris.

The Monte Carlo tournament also will be considered a "1,000" tournament, but unlike the other eight will not be mandatory. Another 10 tournaments will be "500" events with the prize money doubling to US$20 million (13.65 million EUR).