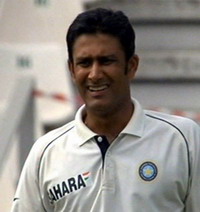 Spin bowler Anil Kumble will help India in the test series against Pakistan.

Board of Control for Cricket in India's joint secretary, Mohinder Pandove said the selectors decided to appoint Kumble as the new test captain, filling the vacancy caused by Rahul Dravid's resignation two months ago.

Leg-spinner Kumble, 37, is the most-successful bowler in India's test cricket history, having claimed 566 wickets in 118 tests.

Kumble has also snared 337 wickets in 271 limited-overs internationals, but retired from the one-dayers in the wake of India's unceremonious first-round exit from the World Cup this year.