Michael Skakel's bid for a new trial was denied by court, rejecting a claim that two other men committed a 1975 killing that sent the Kennedy cousin to prison. 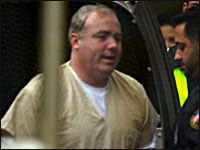 Superior Court Judge Edward R. Karazin Jr. ruled against Skakel based on a week of testimony in April.

Skakel lawyer Hope Seeley said she was extremely disappointed, citing the quality of the evidence. "We believe Michael Skakel was wrongly convicted, and we will continue to pursue every legal avenue available to us," she said.

Those avenues include appealing to a higher court and arguing that Skakel was ineffectively represented by his trial attorney, Michael "Mickey" Sherman.

Skakel, a nephew of Ethel Kennedy, is serving 20 years to life in prison for his 2002 conviction for fatally beating his 15-year-old neighbor Martha Moxley in Greenwich in 1975 with a golf club.

"The state is grateful to see that the judge didn't find anything in the petition that undermined the reliability of the jury's verdict," prosecutor Susann Gill said.

John Moxley, the victim's brother, said he was relieved but not surprised by the ruling.

Skakel sought a new trial based on Gitano "Tony" Bryant's claim that his two friends told him they got Moxley "caveman style."

Karazin wrote in his ruling that Bryant's statements were admissible, but not credible.

"The corroboration for Bryant's claim is minimal," he wrote. "No one has any recall of ever seeing Bryant and his companions in Belle Haven on the night of the murder." Belle Haven is the section of Greenwich, Connecticut, where Martha was killed.

The judge also said Bryant's claim that the other two men went "caveman style" was not supported, saying there was no evidence Moxley was dragged by her hair.

"The testimony of Bryant is absent any corroboration," Karazin wrote. "It lacks credibility, and therefore would not produce a different result in a new trial."

Bryant gave a videotaped statement to a Skakel investigator in 2003, but has since invoked his constitutional right against self-incrimination. The two men he implicated have done the same.

Prosecutors have said Bryant's claim is fabricated and that nobody saw him and his friends in the predominantly white, gated neighborhood the night of the murder. Bryant, who attended the same private school as Skakel, and one of the men he implicated are black; the other has been described as mixed race.

But Skakel's attorneys said key parts of the claim were corroborated by others and that Skakel deserved a new trial.

For his part, Sherman defended his handling of the case.

"I have no regrets about the trial other than the jury's verdict," Sherman said. "I have no misgivings whatsoever."

But the ruling cites instances where Sherman failed to make timely requests or find witnesses.

In his appeal, Skakel also challenged the credibility of a star witness for the state who testified that Skakel confessed to him when they attended a private boarding school. Skakel's attorneys found three men the classmate named as possibly being present, but none said they heard Skakel confess.

Karazin said the three witnesses could have been found before the trial.