Jerry Seinfeld sees his days at high school as unusual

Comedian Jerry Seinfeld felt out of place among the popular kids at his suburban New York high school. 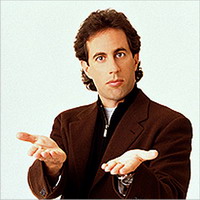 Jerry Seinfeld sees his days at high school as unusual

"I kind of took myself out of the kind of main cliques of the school, because I didn't feel comfortable," Seinfeld tells Parade.com.

"I was kind of sensitive, and I couldn't take the scapegoating and the roughhousing and the cigarettes and the `let's get beers.' It wasn't for me, that world," says the 53-year-old, who graduated from Massapequa High on Long Island in 1972.

"So I would find some nerdy kid, you know, who seemed bright, and I would just hang out with that kid. It was either that, or looking for a touch football game, or basketball or baseball, just always trying to get a game going."

Seinfeld is now part of Hollywood's cool crowd - filthy rich from "Seinfeld" reruns and soon in theaters with the animated "Bee Movie," which he produced, co-wrote and stars in (at least his voice does).

Seinfeld says he became fully committed to a career in comedy as a twentysomething doing stand-up in New York.

"Even if I could just make enough to buy a loaf of bread and not starve to death, (being a comedian) would be the greatest adventure that I could ever go on."