Isaac Hanson, the front man of pop group Hanson, says he is happy be on the road after a hospital trip caused the three brothers to postpone dates on their national tour. 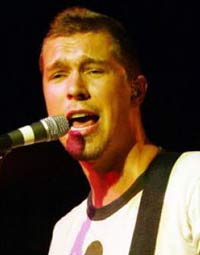 The 26-year-old was hospitalized last week in Dallas after he noticed sudden swelling and stiffness in one of his arms during a show and subsequently underwent surgery for multiple blood clots.

"I lucked out," he said. "In a lot of cases, were it not 2007, I would be holed up in a hospital bed really likely that I wouldn't be able to use my arm and play guitar again."

Hanson said doctors diagnosed him with venous thoracic outlet syndrome, a rare condition that causes pain, numbness and loss of grip strength. The disorder, caused by compression of blood vessels and nerves near the collarbone, is often found in male athletes, he said.

"Who knew that I was an athlete?" he joked with his brothers Taylor, 24, and Zac, 21, who resumed their tour Monday in Knoxville, Tennessee, and made a stop in Richmond on Wednesday. It is scheduled to end Nov. 8 in Las Vegas.

Hanson said doctors gave him the go-ahead to continue the tour, which is to support their album, "The Walk."

This is the second such time Hanson has developed blood clots that traveled through his body to his lungs, a sometimes fatal condition that is known as pulmonary embolism. Hanson said he plans to have surgery to correct the problem and will take blood thinners.

Hanson, from Tulsa, Oklahoma, is best known for its 1997 hit "MMMBop."