Queen Rania of Jordan wanted to reunite a Palestinian mother from Gaza with her son after 25 years of separation. 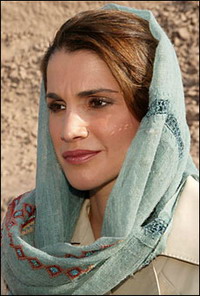 The separation of Mohammed Shamas and his mother, Wafa Abu Shehada, has been detailed on Al-Forssah, a talk show produced by Jordan TV in partnership with a Lebanese network during the Muslim holy month of Ramadan.

Earlier this week, Shamas spoke about the pain of being separated from his mother. During one show, tears filled the audience's eyes when he mentioned that he had only seen his mother through low quality pictures exchanged online.

Mohammed came on the show hoping he would get the chance to see his mother, and producers set up a video feed from Gaza earlier this week.

After hearing the story, Rania, who is Palestinian-born, decided to secure a family reunion and helped bring Abu Shehada to Jordan.

The queen then surprised the show's producers, the studio audience and Shamas when she took the mother to the show to reunite them.

Both mother and son appeared speechless as they intensely embraced each other during the live broadcast.

"As a mother, I can only imagine the pain of being separated from your children," Rania said.

"There is nothing that makes me happier than seeing such a moving reunion," she said.