NBA star Yao Ming was getting married at an upmarket Shanghai hotel Monday in front of 100 relatives, with an equal number of security guards expected to work the event, media reported. 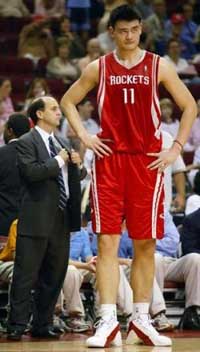 After the ceremony and dinner the five-star Shangri-La Hotel, the newlyweds and their guests were to cruise the Huangpu River in a luxury houseboat, the Titan sports newspaper reported. The wedding cost more than 1 million yuan (US$130,000, EUR 94,930), the paper said.

No teammates, coaches or basketball officials were invited to the nuptials, the Beijing Morning Post reported. However, 100 security guards were to attend.

The 2.26-meter (7-foot-6) Houston Rockets center and his bride, Ye Li, received their official marriage certificate on Friday. Widely-circulated photographs showed the couple in tuxedo and off-the-shoulder gown having their wedding portraits made at a scenic resort in eastern China last week.

Details of Yao's wedding banquet menu were not known. Last year, he joined a campaign to promote wildlife protection and pledged to give up eating shark's fin soup.

Chinese couples typically enter their wedding banquet through an arch decorated with fresh flowers or balloons, but that decoration will be missing because Yao is too tall, the Jin Ri Morning Paper reported.

The paper also said wedding guests will have special identification tags allowing them to attend the event.

Titan reported that Yao and his bride will go to Beijing on Tuesday to take part in festivities celebrating the one-year mark until the opening of the Beijing Olympic Games.

While in Beijing, the couple will host a dinner for members of China's men's and women's basketball teams, the Oriental Morning Post reported. Players told the paper they were still trying to figure out what gifts to give Yao and his wife.

He was faulted for taking too much time off to recover from the NBA season, as well spending too much time planning his wedding and making appearances for the Special Olympics and Beijing Olympics.