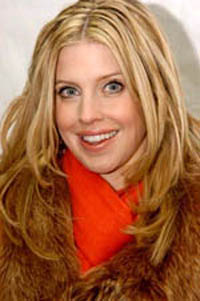 After years of portraying younger characters, the 33-year-old actress is among her peers in VH1's new half-hour comedy "I Hate My 30's."

"I have to say it felt really good to be surrounded and just working with people who were kind of close to my age," says Ritchie, who played Lindsay Lohan's friend in 2005's "Herbie Fully Loaded." During filming of the movie, Lohan was in her teens; Ritchie was in her late 20s.

"I Hate My 30's" focuses on the challenges facing those children of the 1980s who now find themselves thirtysomethings with adult responsibilities.

Ritchie is excited about playing a lead in the eight-episode season of the music channel's quirky sitcom, which premieres Thursday night.

She says the show's irreverence and willingness to be different set it apart from traditional TV fare.

She does not see a lot of herself in her character, Mandy, a self-obsessed beauty who has a knack for saying anything - nice or not - that pops into her head. But her older sister, Carol Ritchie, is not so sure.

Ritchie says her sister called after watching the first episode and said, "`God. They really knew who they were casting, huh?' I was like, `Come on!"'

Ritchie's brother Bob - aka rap-rocker Kid Rock - hasn't seen the show but is pulling for it to be a hit - and for his kid sister's acting career to keep rolling.

Jill Ritchie says she and her brother knew as kids growing up in the northern Detroit suburb of Romeo that they would be professional entertainers.

"We're both creative people," she says.

The actress, who has landed guest spots or recurring roles in "Beverly Hills 90210," "Boston Public" and "Arrested Development," appears in the upcoming "Southland Tales," Richard Kelly's follow-up to the cult film "Donnie Darko."