A large territory of Britain was showered with abundant rains Friday. Some territories of the country received as much in a few hours as normally falls in a month, forecasters said. 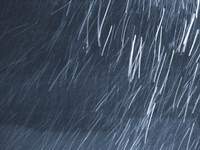 Roads were flooded, trains were canceled, London's Underground subway service was suspended and a bride and groom found themselves marooned at their church during the wild weather.

At Heathrow Airport, Britain's busiest, more than 140 flights were canceled because of the rain. In a statement on its Web site, the airport said arriving flights were "not badly" delayed, and that departing flights were approximately 20 minutes behind schedule.

"Average rainfall for the whole of July is about 35 millimeters (1.38 inches), but some places have had as much as 85 millimeters (3.35 inches) in the last few hours," said Helen Rossington of a weather forecasting company MeteoGroup UK. She said more rain was expected over the weekend.

It has been a miserable, wet summer for Britain: In June, the north of the country was hit by flash floods, which killed three people and forced hundreds from their homes.

Sarah Parfitt and Andy Holtom exchanged vows at a church in Cheltenham, about 100 miles (160 kilometers) west of London, and stepped out to pose for pictures. They found a river next to the church had burst its banks, and they and their guests had to take shelter in a nursing home next door.

"At least it will give us something unusual to remember our wedding by when we are older," she said.