A man who died while traveling from China in the wheel well of a jetliner likely fell victim to asphyxiation or hypothermia during the 11-hour flight, officials said. 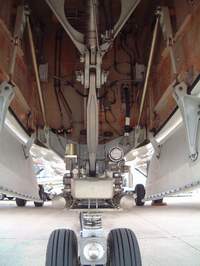 The body of the apparent stowaway on a United Airlines Boeing 747 that arrived at San Francisco International Airport from Shanghai on Thursday was found in the nose gear wheel well during a routine post-flight inspection, airport spokesman Mike McCarron said.

The man, who appeared to be Asian and in his 50s, had few obvious injuries, said San Mateo County Coroner Robert Foucrault, who planned an autopsy for Friday.

But officials said the man - like many others who try to hitch rides in a plane's underbelly - probably died from a lack of oxygen or hypothermia in minus-40 degree temperatures for most of the flight. He was wearing several layers of clothing, including two jackets, Foucrault said.

Most airplane stowaway attempts end unsuccessfully. Counting the most recent victim, the Federal Aviation Administration has tallied 75 similar stowaway attempts on 65 flights worldwide since 1947, and 59 of them ended in death, FAA spokesman Ian Gregor said.

"People think they can make it into a country by hiding in a wheel well," he said. "Almost invariably they get crushed to death, freeze to death or fall to death."

There is little U.S. regulators can do to prevent the practice on international flights, Gregor said. "The security issue is with the origin airport," he said.

The last time someone was found alive after a stowaway flight to the United States was in 2004, when a survivor made it to Miami on a plane from the Dominican Republic, Gregor said.

Stowaways who survive are usually sent back to their country of origin. That was the case with Fidel Maruhi, who survived an ascent of 38,000 feet (11,600 meters) inside the wheel well of a Los Angeles-bound Air France flight originating in Tahiti in 2000.

Sometimes stowaways are allowed to stay after flying illegally into a country.

Victor Alvarez Molina got refugee status in Canada after enduring a four-hour flight from Cuba. He told reporters he clung to a picture of his daughter and hot air pipes in the wheel well to survive a temperature that aviation experts calculated would have been minus 40 Fahrenheit or colder.