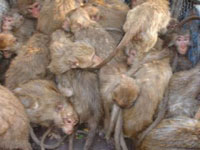 Officials discovered the 950 long-tailed macaques starving and cramped in filthy cages in a raid on a farm in Johor state on Saturday following a two-week investigation, said Wildlife Department assistant director Celescoriano Razond.

"From our initial investigation, they were targeting to send the monkeys to restaurants in China and laboratories in Holland. We are still investigating," Celescoriano said.

The primates were in a pitiful condition, some were eating the carcasses of their young, and another 100 dead monkeys were piled up nearby, he said.

Celescoriano said he believed the macaques had been caught in Malaysian jungles and that they had been caged for at least a month.

"This is the biggest seizure of smuggled monkeys ever," he told The Associated Press, adding that the department has treated the monkeys and released them back into protested forest areas.

Celescoriano said three Malaysians, including one who is believed to be the ring leader, would be charged with unlawful possession and cruelty to wildlife, and that they could be jailed for up to three years or fined up to 6,000 ringgit (US$1,714; EUR 1,428) each if convicted.

The Indonesian, who was a worker at the farm, has been handed over to the immigration department, he said. Immigration officials could not be reached for further details.