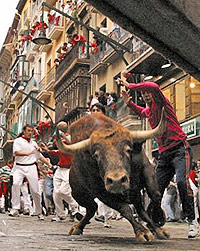 Some people were slightly wounded by the running bulls in the craziest Spanish party. Six massive bulls galloped rapidly down crowded, narrow streets surrounded by thousands of alcohol- and adrenaline-fueled revelers.

Six Spaniards and a 30-year-old American runner - who injured an elbow - were treated at hospitals on day three of the festival, the local government said.

The bulls completed the 850-meter (930-yard) route from a corral on the outskirts of town to Pamplona's central bullring in a fast 2 minutes, 46 seconds, officials said.

The bulls in Monday's run were from breeder Fuente Ymbro. The heaviest of the animals was 645 kilograms (1,422 pounds).

Though several runners fell directly in the path of the bulls at a bend in the route known to aficionados as "where Mercaderes and Estafeta streets meet" the animals jumped over them.

"The adrenaline kicked in at 5:30 when we got to hear and see the bulls," said Ben Diedrich, 21, from Western Springs, Illinois, who was with his father, Brian, 53.

Pamplona's population of 200,000 swells during the San Fermin festival. Around 800,000 visitors came during the weekend, local government spokesman Patxi Cervantes said. The runs are held every morning between July 7-14.

The festival in this northern city, known for its all-night street parties, dates back to the late 16th century, though its roots reach back to when Spain was first Christianized. It gained worldwide fame in Ernest Hemingway's 1926 novel "The Sun Also Rises."

Since record-keeping began in 1924, 13 people have been killed during the runs. The last was a 22-year-old American, Matthew Peter Tassio, who was gored to death in 1995.