Count Gottfried von Bismarck, the stylish and troubled scion of one of Germany's most famous families, has died, police said Wednesday. He was 44. 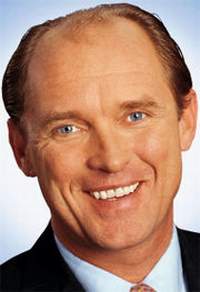 British newspapers reported he had suffered a heroin overdose. A post-mortem examination was due to be held Wednesday.

Gottfried Alexander Leopold Graf von Bismarck-Schonhausen was born in 1962 and educated in Germany and Switzerland before attending Oxford University in England.

As an undergraduate, he was known for his flamboyant wit, lavish parties and extravagant appearance, which at times involved dressing in fishnet stockings or traditional Bavarian lederhosen.

Bismarck's life was clouded by two violent deaths at his homes. In 1986, Olivia Channon, the 22-year-old daughter of a Conservative government minister, died of an overdose in Bismarck's bed at Oxford.

Bismarck - who was not in the bed at the time - was not implicated in the death, although he was charged and fined for possessing cocaine and amphetamine sulfate.

At his trial, his lawyer said Channon's death "is going to be a shadow over the head of Gottfried von Bismarck, probably for the rest of his life." The count said years later that some had accused him of disgracing the Bismarck name.

Bismarck eventually settled in London, working in finance and telecoms. He remained out of the headlines until August, when a 38-year-old man, Anthony Casey, died after falling from a roof terrace at Bismarck's home during a party.

Dr. Paul Knapman, presiding over an inquest at Westminster Coroner's Court, said one room of the apartment contained a "bizarre" assortment of items including a large rubber tarpaulin on the floor, towels, lubricants, bottles of vodka, buckets of sex toys and a TV set up to show pornography.

"Nevertheless," he said, "this was conducted by consenting males in private."

Police concluded Casey's death was an accident, and the coroner's verdict was "death by misadventure," meaning no once was to blame.

A coroner's inquest is expected to be held into Bismarck's death. Funeral details were not immediately available.