Police dogs who searched for explosives after the July 7, 2005 London transit bombings were awarded medals for bravery. 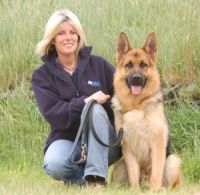 The three dogs were chosen by their police forces to represent the 14 police dogs who sniffed for bombs after the attacks, which killed 52 commuters and four bombers aboard three subway trains and a bus.

"Without these dogs, a lot of good work on July 7 would not have been possible," said Marilyn Rydstrom, director of animal charity People's Dispensary for Sick Animals, which sponsored the medals. "Because of their services, people's lives are saved. When their lives are in danger, they never falter."

Vinnie, a labrador with the British Transport Police, Billy, a Labrador with the City of London Police, and Hubble Keck, a spaniel with the Metropolitan Police, were presented with bravery medals by Princess Alexandra a cousin of Queen Elizabeth II in a ceremony at St. James's Palace.

"They know something special is going on," Rydstrom said before the ceremony. "They know they're the center of attention. They are super little dogs."