Tens of billions of illicit cigarettes, smuggled or counterfeited, are sold on the black market each year, contributing to an increase in tobacco-related deaths and costing governments billions of dollars (euros) in lost revenue, international experts said Tuesday. 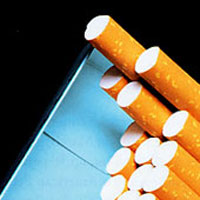 They reported their findings at an international conference being held in Bangkok this week to expedite implementation of a 2003 treaty to regulate tobacco products and their use.

Governments lose more than US$40 billion (EUR 29 billion) each year in unpaid taxes because of the illegal tobacco trade, a sum exceeding the gross domestic product of two-thirds of the world's countries, the alliance said.

"Smuggled and counterfeit cigarettes are sold at lower prices than legal products, contributing to higher consumption and greater rates of smoking-related illness and death," Luk Joossens, senior policy adviser for the alliance, said in a statement.

He noted that the unrealized tax revenues also reduced funding for public health and other programs.

"Tobacco products are the single largest illegally trafficked legal product on the planet," Damon Moglen, vice president of the Campaign for Tobacco-Free Kids, a Washington, D.C.-based advocacy group, told The Associated Press. "The connections between smuggling and organized crime, potentially terrorism and money laundering, are vast."

North Korea is especially notorious for producing counterfeit cigarettes, according to the U.S. State Department and private investigators for the tobacco industry.

However, some major tobacco companies have been accused of smuggling their own products.

In July 2004, a 12-year agreement among European Union countries _ except for Britain _ and tobacco company Philip Morris International resolved legal disputes regarding contraband cigarette sales, and entitled the EU to payments totaling an estimated US$1.25 billion (EUR 918 million).

Tobacco consumption caused 5.4 million deaths in 2006 _ one death every 6.5 seconds _ and will kill 10 million people each year by 2020, with 70 percent of the deaths in developing countries, according to the U.N. World Health Organization.

This week's meeting on the WHO Framework Convention on Tobacco Control seeks to promote the implementation of the 2003 treaty committing co-operating countries to implement measures to reduce tobacco use.