The foundation did not give a cause of death. President Georges Pompidou died in office on April 2, 1974. 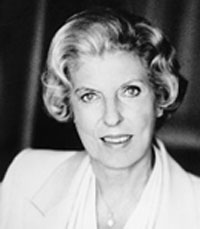 President Nicolas Sarkozy hailed Claude Pompidou as "a very great lady" who "brought honor to our country." But he also said she "suffered because she did not always appreciate the very cruel side of political life."

Sarkozy said he had met her a few days after his May 6 election.

He noted that she lived "very discreetly" after her husband's death. Prime Minister Francois Fillon noted the couple's passion for abstract art. The Pompidou Center modern art museum in Paris bears his name, and was opened in 1977.

The couple met in Paris, when she was a first-year student of law. They married in Chateau-Gontier, a town in the west-central Mayenne region where her father was a doctor.

Claude Pompidou's foundation, set up in 1970, helps handicapped children, the elderly and hospital patients. In a message on the foundation's Web site, she had cited philosopher Rene Descartes: "To be of no use to anyone is to be good for nothing."