A bid to take the perfect photo from a bridge at a national park in New Zealand nearly cost a young Irish tourist his life when he leaned over, lost his footing and fell 20 meters (65 feet) into a river below. 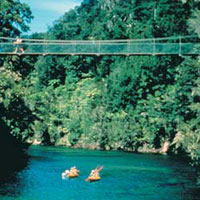 Desmond Loy was hospitalized after tumbling from the Falls River swing bridge in Abel Tasman National Park on Monday. Loy fell into a river, and suffered only cuts and bruises in the ordeal.

Loy, 19, a university student from Banbridge, County Down, almost reached the end of the swing bridge when he turned to take a photograph.

"I leaned forward and remember feeling a bit woozy and a bit dizzy," the Nelson Evening Mail quoted him as saying Tuesday. "I closed my eyes and I could hear the trees and then boulders going thud, thud. It seemed a long way down."

Cut and bleeding, Loy managed to scramble out of the river onto boulders. He said he couldn't believe he hadn't broken his back or fractured his skull in the 20-meter (65-foot) fall.

English tourists on the bridge above saw him and alerted authorities who sent a helicopter to fly him to South Island's Nelson Hospital.